Curt is a bastard. I know this because I watched him intentionally mow down three innocent bystanders in cold blood first-hand, before hopping out of his pickup truck, beating a woman to death with a baseball bat, and then chasing another down the street brandishing a knife and cackling as he went.

It's worth noting that while this is pretty standard behaviour in regular GTA Online, it’s a big no-no in the game’s player-built roleplay servers. The RP world is designed to reflect reality, to the point where even jaywalking, running a red light or speeding 5mph over the limit will land you a fine at best and, depending on the active officer—all controlled by real, fully-trained volunteers—jail time at worst, so harsh is the penal system in this city.

Before catching his fifth prospective victim, Curt was blindsided by a cop on-foot, nailed to the floor, cuffed, read his Miranda rights and rolled into the back of a squad car. He was duly whisked to the courthouse down the road, and, never one to shy away from opportunity, I decided to make my own mark on the unfolding drama.

This man, guilty as he clearly was, deserved a fair trial. I’d been dicked over by sentence-happy cops too many times in this town, so I made it my mission to represent him. We hold these truths to be self-evident.

The law is not my area of expertise. That’ll become pretty clear further down the page, but for this very reason, I feel obliged to make that admission right off the bat. In fact, I know so little about the law that halfway through my latest Grand Theft Auto 5 roleplay expedition, I Googled "Can anyone represent you in court?"

Given the fact you can legally represent yourself in judicial proceedings, I was of the vague understanding that so long as you agreed to accept counsel from another person, they too could vouch for you in front of a judge. It turns out I was really, really wrong about this.

So wrong, in fact, that here are the rules as per the Illinois Attorney Act: “Only lawyers can go to court for someone else. It’s the law.”   Erm… duh! Television court dramas have taught me nothing.

The Act continues: “No person shall be permitted to practice as an attorney or counsellor at law within this State without having previously obtained a license for that purpose from the Supreme Court of this State.”

In FiveM, the open-source community mod for GTA 5 that I roleplay within, I had not previously obtained said license, and it turns out Los Santos is governed by the same in-game rules as their real-world counterparts. What I do have, though, is a silver-tongue—and as my previous RP ramblings have illustrated, I ain’t scared to use it.

I nipped round to the nearby Binco clothes store, strapped on the sharpest black suit I could find and cringed at the fact the server’s apparel editor bugged out and wouldn’t let me remove my black beanie. Ah well, it’s what I say that matters, not how I look, I told myself despite looking like a total twat.

By the time I made it to the courthouse, the rather suspect-looking judge, dressed in full police uniform, had handed down a life sentence to our Curt as he cursed and screamed from the dock, his greasy mullet haircut a match for his haggard face and awful denim waistcoat. FiveM incorporates NewTheft's Open All Interiors mod in its framework, which means a number of otherwise inaccessible in-game areas can be entered, the courthouse included.

“I’m this man’s lawyer,” I cried as I barged through the swing doors like that scene at the end of Miracle on 34th Street when the men storm in carrying sack-loads of letters for Santa Claus over their shoulders. It’d take a miracle to get this prick off the hook, but I’ve never been one to shy away from a challenge.

“You’re late!” harked the judge. I was very late, but pointed out that a crime and punishment of this magnitude surely must be held in front of a jury of the accused’s peers, not a copper guising as a judge and two other policeman who were clearly his pals.

In essence, the judge told me to piss off and take the matter up with his colleagues at the holding cells at the station, where Curt would ultimately be processed. I’d understood this to be the order of things during my own umpteen run-ins with the law in Los Santos, so knew there was still hope of getting my inadvertent client off the hook.

Back at the station, I challenged the ruling and suggested Curt’s abysmally-handled trial was a miscarriage of justice and that he must, HE MUST, be released immediately. I screamed and shouted and embodied all of those hours lost to binge-watching Making a Murderer while eating crisps in my pants in the dark at home. HE’S INNOCENT, I cried at one point, momentarily forgetting that I’d already admitted my client’s guilt, but that it was a default in the case that should set him free.

I made It’s Always Sunny’s Charlie Kelly look like Johnnie Cochran as I babbled on about rights and the constitution and tipping the scales of justice, and after a while I overheard one officer mutter to the other: “Should we just let him go?” If boring these guys into submission was how this was going to go down, I’d absolutely take it! Nobody cares how you get them out of trouble, so long as they walk free, right?

“Yeah, fuck it,” replied the boss.

“In fact, wait, check his credentials first, will you?”   It was all downhill from here. First this: 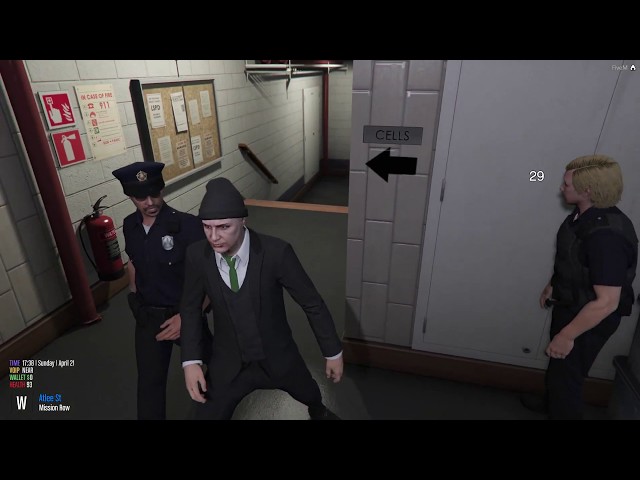 I posed as a lawyer and tried to clear a serial killer of murder in a GTA 5 roleplay server Jailhouse rock bottom. GTA LAWYER FAIL 1 Curt is a bastard...