There’s plenty of cosplay and fan fiction inspired by Game of Thrones, but you’ve unlikely seen a creative work like this.

Polish artist Tetiana Galitsyna has created a preview of Season 7 using nothing but colored sand.

It starts off with a pair of hands creating the Iron Throne. Then opposing sigils from House Lannister and House Stark take form, and then brushed away.

Jamie, Cersei and Tyrion Lannister seemingly appear out of thin air, followed by their rival Jon Snow and his wolf.

The Lannisters are swept aside by the Night King (a preview of things to come, perhaps?), who frighteningly looms over The Wall.

Finally, a dragon fills the frame, and Daenerys Targaryen emerges, as she finally begins her final push towards Westeros and the Iron Throne.

Galitsyna is the founder and creative director of the Galitsyna Art Group, and won Poland’s Got Talent.

Sand is one of her preferred materials, but she also paints with light, and incredibly, snow (example here). A Game of Thrones snow animation would perfectly fit the show’s Winter is Coming theme, but would be very difficult to work with, given it’s so ephemeral.

Either way, consider us impressed! 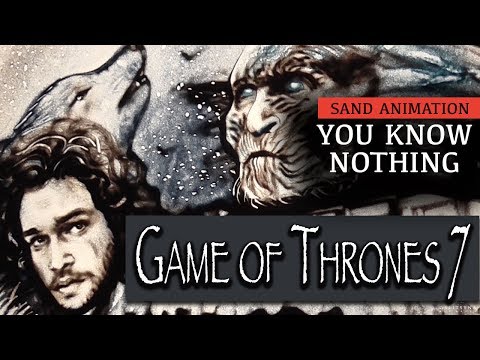 There’s plenty of cosplay and fan fiction inspired by Game of Thrones, but you’ve unlikely seen a creative work like this. Polish artist T...