GUNRUNNING AND MORE COMING LATER THIS SPRING & SUMMER.
Stock up and bunker down as you take on the craziest militias across the state of San Andreas in another massive update for GTA Online.
Featuring brand new weaponized vehicles and exciting new missions, get ready to fight for supremacy in the illegal arms trade and wage war with the latest in high-powered military hardware.

Upcoming update main theme is creating your own paramilitary organizations. Players will now be able to buy their paramilitary base and do vast variety of missions for Merryweather, illegal actions such as transport of war trophies, human trafficking and also protection of famous VIPs of GTA universe like Jock Cranley, Vinewood Stars etc.
Bases will be customizable, and with special upgrade as an addition they will allow player to afford exclusive Merryweather gear: new rifle (SCAR equivalent), prototype granade launcher (granades explode near the target in mid air), tactical SMG (modern looking gun with the fastest firerate of all weapons). Not only that, but that one upgrade will include ability to customize your weapons on whole new level. From camoflauge tints, laser sights, to new scopes for both short and long distance, fast pull magazines, stocks and much more. Just to make this clear this won't be available in Ammunation, just as I said before, you have to get this upgrade for your base and merryweather will give you access to this stuff.
There are also many vehicles and some of them are customizable if you own your base. Returning attack chopper, light tank, camo jeeps, plane and jet.
Of course there are new clothes and again some of them are only available to purchase in your base. Not much to say there, just some military helmets, vests and normal clothing. 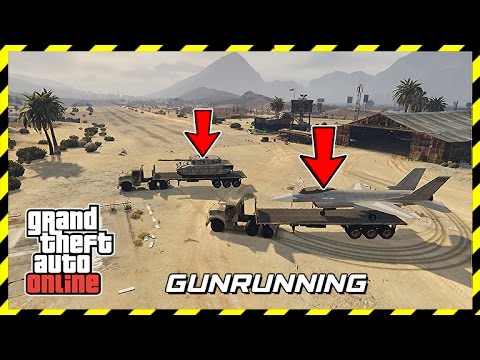