I think I see it," says Walter. He sounds pleased, excited, optimistic. I've known this man for all of 20 minutes, and he is undoubtedly my easiest mark so far.

Truth be told, I don't even know his name. I've conjured his epithet on account of his bald, bespectacled, fedora-sporting avatar that makes him look ever-so-slightly like the lead character from Breaking Bad. I don't know what Walter does for a living here in this GTA 5 roleplaying server, nor where he stays, or whether or not he drives a car. I know nothing. Actually, that's not true. I do know he is not getting a refund on the two thousand dollars he's just dropped to join Phase Two of my rural Los Santos-based whale-worshiping cult. Come on, that was a given.

"I think I see it!" says Walter again, this time with even more enthusiasm than before. I stay silent. The rain hammers down on the choppy waters, and as we flank the El Gordo lighthouse, I sound the tugboat's yawning horn. I don't have a clue what I'm doing, in case that wasn't clear. But I'm absolutely minted by this point and the siren lends this misadventure a degree of grim sincerity.

Walter thinks I'm leading him to Noosie, by the way, the fantastical Loch Ness Monster-aping blue whale creature I've absolutely just made up. I think I see it. Walter doesn't see shit. And he sure as hell didn't see the sharp end of my hatchet swinging for his back. Get the money, get rid of any witnesses, that's how this works. By chance, Walter turns, and I catch his arm. "What the fuck!" he yells. "You're a crazy bastard! What the fuck is wrong with you?"

Without a fight, he leaps from starboard, swims to shore, hops in my truck and takes off up the dirt track that leads back to the Senora Freeway. Huh, he does drive.

After my most recent Liberty City-meets-Black Mirror fever dream, I've returned to San Andreas via the FiveM open-source community modification for Grand Theft Auto 5. After a slight crisis of conscience in previous outings, I've now given in to the fact I'm a bit of a scumbag, and, after realising the most fun I've had GTA roleplaying was when knocking off a string of banks while posing as a journo, I decided to institutionalise on my own terms by creating a cult. Enter the Catfish View Whale Watchers.

Now, I can't say for sure why this scheme worked, but I can say it made me a ton of fake virtual moolah. In roleplaying terms, maybe my silver tongue was responsible. I do, after all, consider myself the Martin Madrazo of chicanery, the boss of beguiling, the sultan of swizz. On practical terms, perhaps FiveM's vastly modded world was enough to let folk believe a gargantuan whale-beast could be fed into the ocean off the North East coast of San Andreas without anyone noticing. Why the hell anyone reckoned I'd know the exact whereabouts of Noosie the LS Monster remains a mystery, but my Tyler Durden-style offence worked a treat.

From the sleepy backwater burgs of Blaine County, to the hustle and bustle of Legion Square, I spread rumours like wildfire. I fed falsehoods to strangers all over the server's busiest hotspots: chatter in clothes shops, forced conversations with delivery guys, bare-faced tales to taxi drivers—I even helped divert the cops from a docklands drug deal at one point, so long as the dope boys promised to stop by the coast at some point down the line, or at least send the next sucker with an open mind and a bulging wallet my way.

I had all the answers.

The shtick was simple. Sure, anyone can hire their own tugboat, and anyone can fish off the shores of Catfish View, but I'm the only master of the ocean in this town, and I'm the only one who knows the gradients of the beast and how to lure it out of its slumber. That's right, the very same sea monster the lady at the shooting range/man at the office/teller at the bank/paramedic that revived your pal/mechanic that fixed your motorbike/butcher/baker/candlestick maker mentioned to you before. I know how to find it.

It'll cost you, of course. And this isn't just some leisurely whale-watching expedition, either. Noosie bears magical powers. I can't tell you what they are, of course: on that you'll have to trust me. Phase One of the CVWWs will cost you a grand, and I promise you won't regret it. Small print: I will wait until its dark, circle the lighthouse, turn on you with an axe, and take off with your money. If I get my timings right, you'll fall from the stern of the ship, and being incapacitated in the water will cause you to blackout and respawn at the infirmary. As per RP rules, if you respawn back to hospital you forget the last quarter of an hour and the persons involved.

That's all I need.

After conning a handful of suckers, I reinvested in my plan. I returned to the same landmarks up and down the map, and slung a few bucks to those willing to join the cause. All hail Noosie, the majestic sea mammal. I heard it can make you fly. I heard it makes you invincible. I heard it grants you infinite money! Better still, I even found that some of my previous marks—and, hats off to them, diligent roleplay rule-followers—were among the new believers after the fact.

I felt like a celebrity, but kept a low profile about town. I joined in the hearsay, preyed on potential disciples, and did whatever I could to talk round naysayers.

And then, of course, I met Walter.

What's Phase Two?" was one of the first questions he asked. I hadn't thought this far ahead. Until now, I'd either faced reluctant acceptance or profound rejection. I hadn't considered a hierarchy of faith. I promised seniority behind me, and, without almost any thought Walter was on board. What a sucker. Or so I thought.

After Walter took off with my truck, I made my way back to shore as the waves battered off the El Gordo lighthouse archipelago. It was beginning to get light, and, without a vehicle, I convinced a delivery man to let me ride in the back of his van to the city. (For the sake of realism, almost all cars in FiveM's servers, including those driven by NPCs, are locked by default.)

Looking back now, this was all too convenient. I didn't question why a guy in a removal van would be idling at the end of the dirt track that leads to the Senora Freeway, or why he was so willing to give me a run back to Legion Square. Or how he knew so much about me, as he chatted from his cab. Or why he'd left the loading door of his truck open. Or the fact that he didn't notice the man careering towards the ramp with, clearly, only one thing on his mind.

HO-LY-SHIT. Walter is in a gang. The mythical whales have come home to roost.

Needless to say, this little run-in marked the end of my malevolent scheme. After being laid out in dramatic style, Walter's henchmen reclaimed the cost of Phase Two, and no magical mammal was ever going to save my sorry, lying arse.

I've since returned to the hot-spots I once peddled tales of the Cat Fish Creature from—Legion Square, the nearby Binco clothes store, the docklands—and not one person recalls the whale-worshiping cult I was once so proud of. How quickly times moves on.

I've since learned Walter's partnered with a motorcycle gang of drug dealers, and I understand they're in need of a mechanic. How unfortunate it'd be if they wound up with a rogue repairman on their books.

But perhaps that's a story for another day. In the meantime, all hail the memory of Noosie the LS Monster. 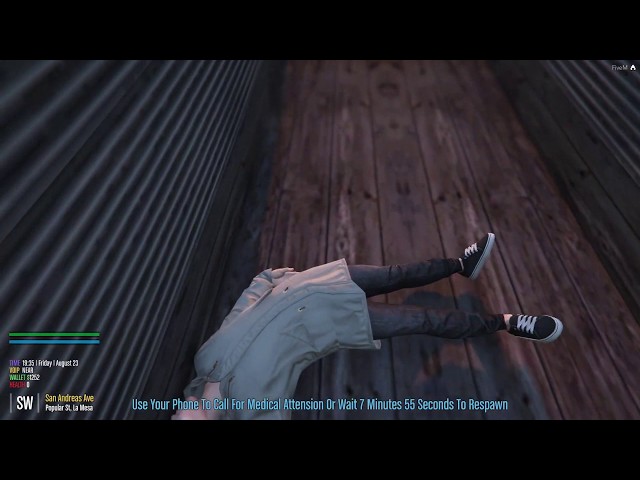